The Varsity has covered our “Choice” Chain campaign again.

We appreciate them reaching out to us for comment. Now is as good a time as any to make some public clarifications, both about “Choice” Chain and about specifics in the article.

Why We Run “Choice” Chain at U of T

First, we think it’s important to run “Choice” Chain on campus in order to make the victims of abortion visible to the U of T community, and to enter into dialogue on how abortion ends the life of a human being. We do this to change how people think and feel about abortion, in order to make abortion unthinkable and end the killing of pre-born humans. 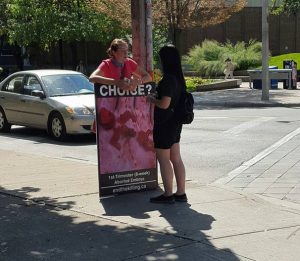 Our society uses a lot of nice language to talk about abortion (choice, reproductive freedom/rights, etc.) and a lot of dehumanizing language to talk about pre-born humans (clump of cells, blob of tissue, etc.). “Choice” Chain makes pre-born humans visible through ultrasound photos and embryoscopy images of healthy babies and photos of those children who have been decapitated, dismembered and disemboweled through abortion. “Choice” Chain pictures cut through the euphemisms, so that we can have a dialogue about abortion grounded in the reality that abortion kills pre-born human beings.

We know the pre-born are human. We know that life begins at fertilization, a fact taught uncontroversially in our own curriculum at U of T. We simply assert that all human beings deserve fundamental human rights. Because pre-born humans are denied their right to life, and because 100,000 human beings are killed by abortion every year in Canada, UTSFL runs “Choice” Chain to make the victims visible to the U of T community and to challenge people to respond to this injustice.

What are the allegations against UTSFL?

Bearing that in mind, what are the specific allegations against UTSFL?

Is it that we have triggered students? The Varsity did print most of my reply:

Obviously our images can be triggers… But given the weight, given that human lives are at stake, given that people who may have had abortions before may well make that decision again — in relatively large numbers — when we go to the public sidewalks, if there were a way for us to skip over the people that have had an abortion and never will again, I would love to be able to do that. But the stakes are high and we know that people are going to walk by. We also do carry resources on us for people facing crisis pregnancies, but also for people that have had abortions.

Is it that our signs are “misleading?” This is what Teodora Pasca suggests. How are the signs misleading? 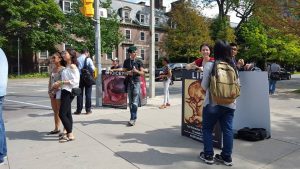 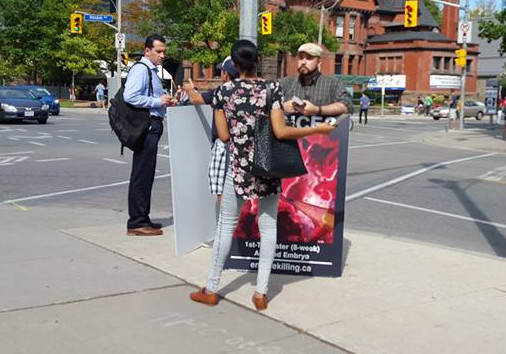 (Some people suggest the photos are inaccurate, but multiple physicians have vouched for the accuracy of the photos from this source, including Dr. Anthony Levatino, who’s performed 1200 abortions himself, and Dr. Fraser Fellows in a debate we hosted in 2013, who performs abortions in London, Ontario.)

Teodora also used the word “shaming.” Our volunteer agreement, which members of our activism team must sign, includes legally binding our team members to never shout, never pressure anyone to look at the signs, and to “always treat people with respect.” We condemn the act of abortion, but we are not there to point the finger at someone’s who’s had an abortion or participated in one in the past. If our goal was to shame passers-by, I wouldn’t be running this campaign. Our goal is to change how people think about abortion, by showing them what abortion does. “Shaming” is just not how we approach activism. It’s not the experience of “Choice” Chain conversations. I’d invite anyone who wants to observe a “Choice” Chain to contact us, and I’ll set it up.

Also, it’s important to note, as The Varsity does, that both St. Michael’s College and the University of Toronto administration recognize the importance of freedom of expression on campus and aren’t interested in censoring or interfering with student groups engaging in activities like “Choice” Chain.

“Choice” Chain costs a lot of time, not a lot of money

Lastly, the headline is “St. Michael’s College funds pro-life group.” The opening sentence points out that UTSFL received $1450 in funding this year from SMCSU. The remainder of the article focuses exclusively on “Choice” Chain. The obvious implication is that SMC/SMCSU funds “Choice” Chain. While I don’t think there would be anything wrong with that, it’s just not actually true since we started the “Choice” Chain campaign here in 2013.

What does our SMCSU funding get used for? It’s mostly used for our other activities: lecturer fees, film licences, photocopies, print materials, posters, etc. It’s used to support our outreach tables, where we highlight resources for parenting and pregnant students on and off-campus. It’s used for our debates, panel discussions, and film screenings, or other outreach events. (We also told The Varsity this.) 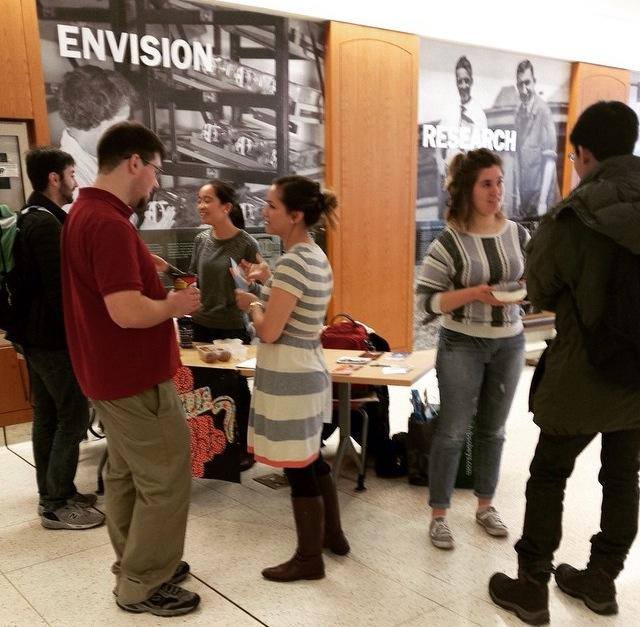 I’ve asked the author about the misleading implications of the headline and the lead, and he passed the concern onto his editor.

(As a sidenote, I don’t believe Ryerson SFL or UOIT Speak for the Weak have been “defunded” because they’ve never been funded in the first place, and I think only UTMSFL has lost club status — the other clubs have never been recognized to begin with. I’ve pointed that out to The Varsity for correction.)

But, what if we did use more of our club budget to save lives?

What if we were using our club budget primarily to fund “Choice” Chain and be a voice for the voiceless? How many other clubs have an opportunity to use their funds to save human lives?