↓ Skip to Main Content
Home › Issues › Abortion › New Media, Old Media, and Getting Beyond Scapegoating in the Pro-Life Movement

New Media, Old Media, and Getting Beyond Scapegoating in the Pro-Life Movement

In reaction to John Bentley May’s article in the Catholic register about the Salt and Light Television / LifeSiteNews.com controversy within the pro-life movement, Dorothy Cummings McLean has an article of her own filled with honesty and insight about the situation.

This morning I woke up at five, feeling sick. Today I want to defend pro-lifers without worsening the battle between fans of Fr. Thomas Rosica and fans of LifeSiteNews. I’m not sure how to do that, and it seems so important.

When I look at all the combatants in the recent fuss over Fr. Rosica’s intemperate blogpost attacking the intemperance of pro-life leaders, I see a lot of good people. Fr. Rosica is a good man with a wonderful television station that offers Christians educational and spiritual programs. John-Henry Westen is a good man with a popular web site that offers social conservatives stories and viewpoints they won’t find in the mainstream media. John Bentley Mays is a good man writing from the viewpoint of a recent convert to Catholicism. Then there are those who were disappointed when the archdiocese of Boston sanctioned a hero’s funeral for pro-choice Ted Kennedy, complete with a eulogy from pro-choice U.S. President Barack Obama. They’re probably good people, too, when they’re not losing it on Fr. Rosica’s answering machine.

I have often criticized the pro-life movement… I have muttered about public relations morons. I have written against the use of gory photographs of mutilated aborted babies. But I have been infuriated when I read in the papers, again and again, that pro-lifers are “anti-choice” and “extremists.” And I never thought to see the word “extremist” applied to non-violent pro-lifers in The Catholic Register, as I did last week.

Glad to see I wasn’t the only one surprised by the term “extremist.”

But her conclusion in the end about one of the causes of the problem surprised me:

There is something new going on in the Canadian Catholic community, and it is stirring us up. I’m not referring to abortion, which is something we have strived against since 1969. I am referring to the new media revolution. The old media of print and television are being displaced by the new media of the Internet. Now instead of being restricted to writing letters to the editor, anyone can be an editor. And this is making those used to the old media very nervous.

I think it’s a very important observation, but I’m not sure she’s drawing the right conclusions.

First of all, who’s new media and who’s old media with respect to LifeSiteNews.com and Salt and Light? LifeSiteNews.com is a web-based news service without an RSS feed (in 2009!), while Salt and Light runs an active blog (which… I just realized uses the same WordPress theme as we do), webcasts their video feed, and is even active on Twitter. There’s no clear old / new media divide here.

But I think there’s a bit of Here Comes Everyone going on here. It’s much easier for anyone to have their say. Meaning, it’s a lot easier to get carried away when anger builds up collectively online, as opposed to everyone just shouting at their television sets in the privacy of their own homes.

This can be a good thing, if it means mobilization and opposition against real moral wrongs (like the movement against Bill C-384 in Canada now). But it’s also dangerous when it comes to scapegoating and in-fighting.

Everyone needs a little more xkcd in their lives: 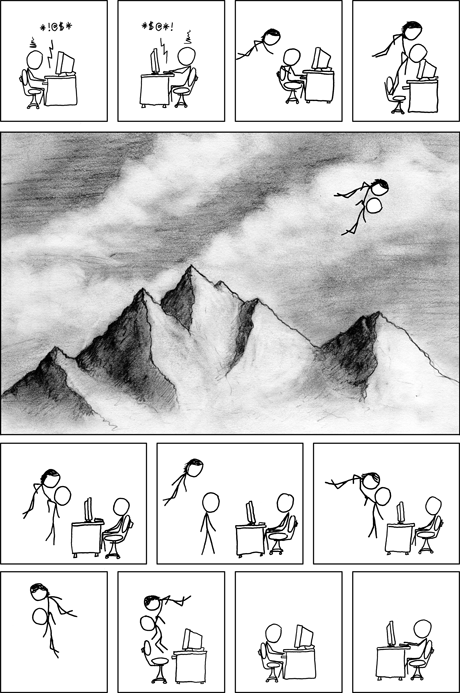 4 Comments on “New Media, Old Media, and Getting Beyond Scapegoating in the Pro-Life Movement”