balleyne Posted on May 14, 2014 Posted in Abortion No Comments Tagged with motion 510, niki ashton, politics

That, in the opinion of the House:

(a) a women’s right to choose abortion is a fundamental question of equality and human rights, both in Canada and around the world;

(b) the key priorities of the government during the upcoming international summit on child and maternal health on May 28-30, 2014 should include empowering women globally, promoting gender equality and supporting reproductive health care including the full range of family planning, sexual and reproductive health options;

and (c) the government should lift its policy of refusing to fund international programs that support a full range of family planning and reproductive health care options including abortion.

While it’s great that an NDP MP is now underscoring the point that the debate is clearly very open, the motion itself is terrible and needs to be defeated.

Now is the time to take action: 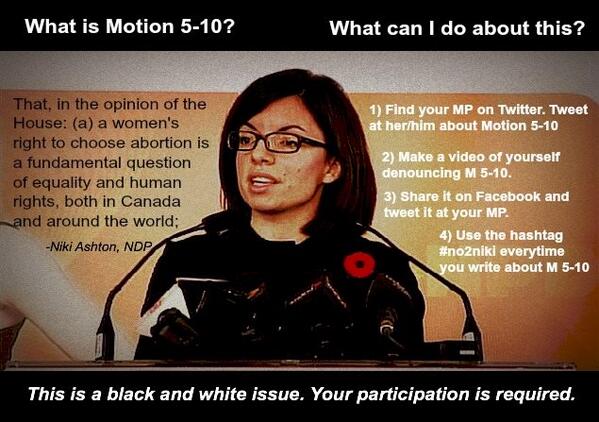 Here’s how Luis, our Education Coordinator, is saying #no2niki:

Now is the time to be a voice for the voiceless. Find your MP. Take action now!